Nifty opened Gap down today and declined sharply till mid-session to touch the low of 8273 as I expected in yesterday’s report. After giving low of 8273 Nifty bounced 74 points to touch the high of 8347 followed by a sharp decline again in end session and finally closed 63 points down at 8292. Overall it was a volatile day with repeated up-down swings. Let see what charts are saying.

Generally, we see wave (4) correcting 23%-38% of wave 3. Here wave (4) of ‘A’ corrected exactly 23% of (3) in (abc) pattern but personality and structure of waves is creating doubts and forcing me to feel that wave (4) is not yet completed and may go above today’s high again. Let me show you today’s move closely to explain why I am feeling so.

So, I am assuming this last fall from 8347-8277 as wave “abc” and there may be a formation of “3-3-5 Flat Correction” or “Complex Correction” that can take Nifty above 8347 again to complete wave (4) and start wave (5) towards new low again. 38% retracement for wave 4 placed at 8392 which is normal and 50% placed at 8430 which is also possible but rare case. Exact levels we can calculate and predict only during market hours seeing live waves.

Today I posted chart on my Facebook time during live market hours suggesting Buy Nifty. Let me show you the chart: 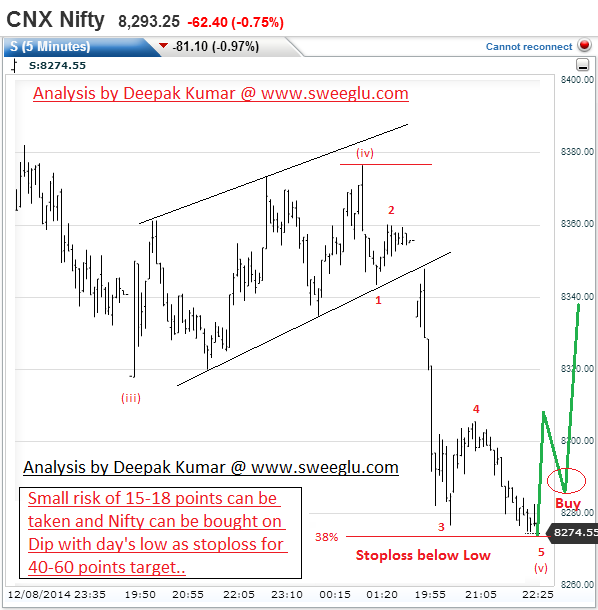 This is 5 minutes time bar chart of Nifty I posted on my Facebook timeline today during live market hours. Let me explain why I suggested to buy Nifty with day’s low as stop loss when Nifty was around 8290 spot.

I expected Nifty to show 8273 in my yesterday’s report and this level of 8273 was for minimum 38% extension of wave (v) of 3. I looked at the chart after Nifty touched minimum extension wave (v) and identified five waves within (v) of 3 (Wave 5 or (v) always have five inner waves).  See the chart above

In this way, using the combination of wave’s cycles, wave’s calculations and wave’s personalities you can take low risk entries with small stop loss and with confidence. Please read “Personalities and Calculation of Waves” chapter if you are not able to understand this explanation.